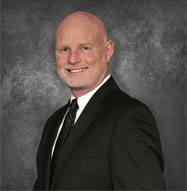 William “Rocky” Hollingsworth enlisted in the Army in 1973.  He obtained his initial certification in biomedical electronic and x-ray equipment at Fitzsimons Army Medical Center, and performed duties pertaining to his field of expertise at Fort Gordon, GA until 1977. During his term of duty, Rocky helped to open the Dwight D Eisenhower Medical Center at Fort Gordon.

After serving his country, Rocky took an interest in construction, and became a member of the Colorado Carpenters Joint Apprenticeship in Denver until 1986, when he established Foothills Commercial Builders.

As President and CEO, Rocky provides the guidance that is crucial for maintaining a firm’s consistent growth, while Foothills’ long standing success is reflective of his leadership, creativity, and intuitive knowledge of construction. His experience and integrity allows the company to work with the very best architects, consultants, equipment vendors, and financial institutions in the region.

Rocky’s outside interests include snow skiing, boating, fishing, hiking, and philanthropy by way of various fund raising programs. Rocky strongly believes in a sense of community beyond the company doors, and cultivates team spirit within, which is the central focus of the company’s culture.